My nearest shopping mall is currently playing host to a collection of pre-historic creatures! I went to visit them recently.

I thought they were really marvellous. They moved and made sounds so realistically, it felt like going to the zoo!
The T. Rex was a bit scary actually.....

~Rundown~
Hat-Vintage
OP-Handmade
Everything else-Offbrand
I feel that my outfit was quite suitable for the day's activities- a little like an explorer!
Well, I'd better get on with my packing now, as I'm off to Singapore tomorrow! Very excited to see my family again and to meet some new Lolita friends. I'll let you know how it goes!
Posted by Sapphira at 11:30 10 comments:

What sort of pet suits a Lolita?
Maybe a raven would be very suitable for a Gothic Lolita, dark and foreboding! For a flamboyant and elegant classical lady who wears Juliette et Justine every day, perhaps a peacock? And for an ama-loli, a fluffy and cute pomeranian might do the trick.
Personally, I favour a small, peculiar creature named "Nikita" 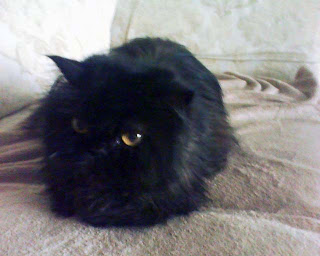 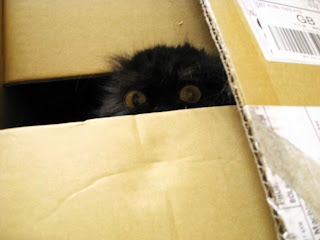 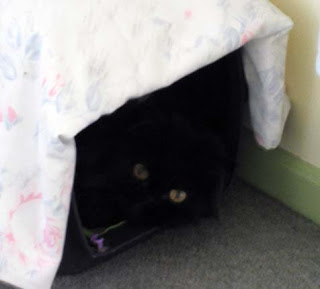 Yes, that's my persian cat! My parents gave her to me as a kitten when I was ten. She's a grand old lady now, but she's very tiny still! Next door's flabby British Shorthair, who's only 1 or 2, is quite enormous in comparison.
Nikita loves boxes more than anything in the world, and has been known to attempt to climb into a match box. Needless to say, although she is a small cat, the attempt was unsuccessful. No doubt she will try again!
Posted by Sapphira at 14:53 4 comments:

Email ThisBlogThis!Share to TwitterShare to FacebookShare to Pinterest
Labels: Nikita

A vision of summer (according to the bus driver!) 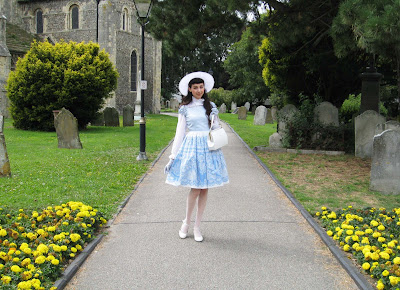 Hello eveyone! Hope you all are well.
Yesterday I had a very nice day shopping and having lunch at Teddy's again. I wore a blue and white outfit to include my new broad-brimmed hat. I took the bus into town and the driver said that I looked like a "vision of summer" and wished he was 21 again! I was very flattered and thanked him. I didn't mention that I'm 23!

Hello everyone! Hope you're all having a nice weekend.
A little while ago I went to Tunbridge Wells, a lovely town near the Sussex/Kent border. We walked down the hill from the new part of the town to the older part, looking in all the charity shops, antique shops and second-hand bookshops on the way! That's one of my favourite ways to spend a day, and I enjoyed myself very much.
I came back home with a couple of goodies! I got a 1920s edition of What Katy Did at School with a nice Art Nouveau style binding and a pretty, pleated Laura Ashley skirt in a charity shop. I'm a big fan of this romantic, demure UK brand, but I haven't managed to collect many pieces yet. I'm wearing a skirt I made using Laura Ashley fabric in this post .
I wore my new skirt a couple of days later to visit Hove museum. I coordinated with my 1970s leg o' mutton blouse for a suitably period style!

Thanks for reading!
Posted by Sapphira at 08:51 7 comments:

I tend to leave my fingernails natural, but I recently I was admiring my friend's s pretty, subtle style of manicure. She suprised me with the very same nail kit as hers for my birthday! 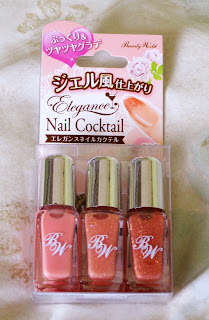 left to right A, B, C
There are three colours, as you can see. The base colour (A) is a natural pink, next is a subtle glitter (B), then a sparkly coral colour (C). You build them up in layers like this: 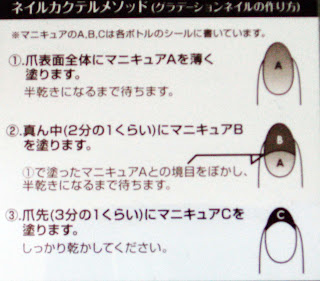 It was simple to do, and I was fairly satisfied with my first attempt! 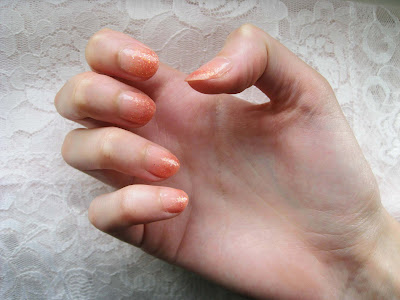 It's such a delicate colour that it's a bit difficult to photograph. I like the effect though! It's not too much of a departure from natural nails, but adds a little subtle sparkle.
What sort of nail style do you favour, dear reader? And what do you think works well with classical kei?
Posted by Sapphira at 11:07 3 comments:

Last month it was a very special occasion! My best friend's sister's wedding.
It was a beautiful sunny day, and everyone was so happy.

I wore this simple button-through retro onepiece, in a pretty peach-pink colour. I don't often wear pink, but I've recently become a fan of this particular coral-y shade. Actually, I'm waiting for a Fairy wish skirt to arrive in a similar colour!
I used two shades of subtle pink for my eyeshadow, continuing the romantic theme.

I put my hair up in a high bun, and accessorised with my faithful floral corsages!

I really like the idea of putting the roses at the back of the bun rather than the front. I've seen some Jesus Diamante models doing it with their huge hime bumps!

Congratulations to the lovely couple, and thank you for the wonderful day! I'm dreaming of having such a beautiful wedding myself someday....
Hope you enjoyed the pictures! Thanks for reading.
PS: Voting for the coordinate competition I entered is closing in a couple of days! Could I possibly implore you for your vote? Thanks so much to everyone who voted so far!
Posted by Sapphira at 09:09 8 comments:

Hello readers! Today I'm making a post about the last day of Hyper Japan, including the tea party with Kanon Wakeshima.
After the fashion show, my friend and I took our seats for Kanon right away. We couldn't see much the day before, and we didn't want to miss our chance again! Since we were seated so early, we were able to watch the Square Enix cosplay contest, a very interesting experience! I haven't seen this sort of thing before, I didn't know that cosplayers do a little performance on stage. They were rather good I thought. My favourite was actually one of the judges:

Not a clue I'm afraid, but very very cool. I wanted to ask for her picture afterwards, but I was too shy.

The last photo is my friend! It was fun to see him in character. The second is another of the judges- his costume reminds me of Gackt! The fellow in the first photo had a very positive reaction from the crowd, though whether or not his bare chest had anything to do with it I really couldn't say.....
Next was the moment we'd been waiting for! A huge crowd gathered, I think even bigger than the day before.

We had seats right by the cello! Today Kanon's performance was even better, and featured more cello-playing, which of course is the highlight!

She looked more herself today in the long brown wig, again with a nice 'midi' hat and the killer boots! The glittery underskirt made her look elegant.

At one point she was handed a Spanish flag from the crowd and waved it around! Well done Spain. I think the audience was more enthused today and it made her really happy.

As I recall, the set began with Kajitsu no Keikoku, followed by Lolitawork Libretto, and finished again with Princess Charleston. Thank you Kanon, for another beautiful performance!
What happened later?

The tea party!
This was held in Hyper Japan's maid cafe. I suppose there were about 15 Lolitas attending? We were each given a pretty cupcake and a raffle ticket and sat down in tables of four.

Mae and Amy were at my table! Happy happy!

I'm afraid I didn't quite catch the name of the girl I was next to. I liked her yellow and blue outfit a lot- she even matched her eyeshadow!
Kanon came in, now sporting a dark blue outfit and her own hair, a pretty milk tea colour. She picked out the winners of the raffle- Amy was one of them! The prizes were some small goods from Baby, the Stars Shine Bright- phone straps, stickers, postcards, hair pins and so on.
Each table was allowed a little time with Kanon. We could ask her questions though the translator.

Everyone was a bit shy, including Kanon! She's a really charming girl though, she must have been very tired but she still gave long answers to our questions. I noticed that she has a brace- very cute! I asked which was her favourite ouftit that she's modelled for Baby, and she said a 'mizu iro' (light blue) jumperskirt. I can't quite think which one she means, but I love that colour too! Does anyone know?
She also said that apart from Baby she likes Jane Marple. She has good taste! Kanon also talked about her musical influences, including classical composers and French artistes. French music seems to be very popular in Japan. We hardly hear about it in England, despite being so close by!
When we had all had a chat with Kanon, and after taking photos, she left to go to the judging of the UK Kawaii Star of the Year contest. She certainly had a busy schedule! It really was so nice to meet her, and though the tea party was quite short it was very enjoyable. I feel very lucky to have had such an opportunity! Thank you to the organisers, and to Kanon herself. And thanks to you for reading!
PS: Kanon wrote about it in her blog here. I love her regimental stripe onepiece at the end of the post!
Posted by Sapphira at 08:37 4 comments:

Please vote for me!

Hello everyone!
I've been a bit busy these past few days, so I'm just doing a small post today. I've still got to write about the tea party with Kanon, so I'll do that this week. In the meantime I wanted to let you know that I've entered a coordinate competition on facebook! It's run by Kawaii.i, a website that promotes cute things from Japan. I reccomend watching MaNa's videos, they're really interesting!
You can vote for my coordinate here (let's hope the link works!)
Thank you in advance!
Sapphira
xxxx
Posted by Sapphira at 13:25 4 comments: